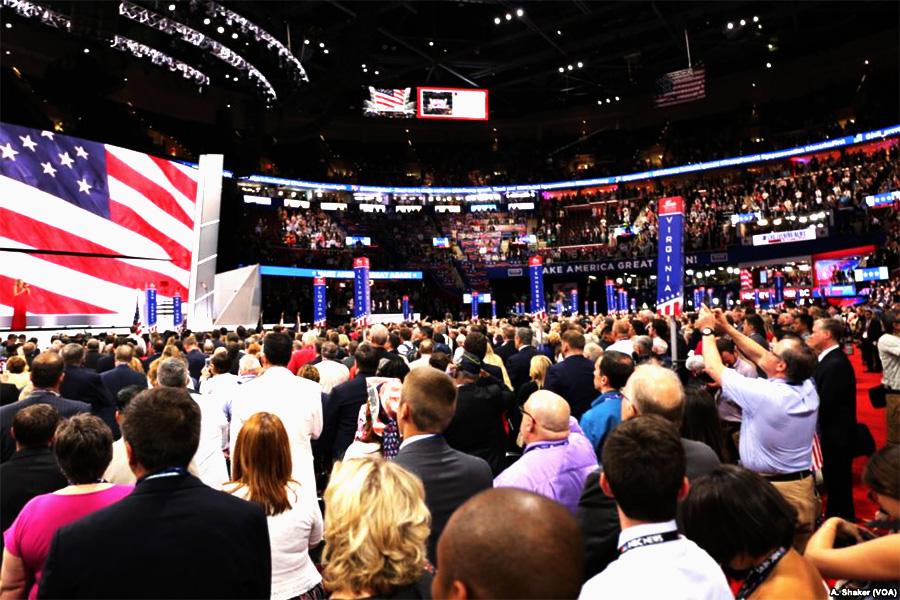 The Republican National Convention in Cleveland, a gathering that was anticipated for months, held “the greatest meeting of intellectual people ever.” The splintered party produced a message that aimed to rally the people and the party around the controversial candidate, Donald Trump.

In their message, the only individual that is capable of bringing America back from its glory days and scrapping the current corrupt system that they described is the self-made billionaire himself who believes that, as he puts it, “…no one knows this system better than me…which is why I alone can fix it.”

The Republican Party had organized themes that were variants of the campaign slogan “Make America Great Again.” The first day, dubbed “Make America Safe Again,” focused on uniting Republicans around Trump as the individual who can protect the nation from terrorism and violence.

The second day, “Make America Work Again,” revolved around the issue of unemployment, which included Trump’s plan to expel illegal immigrants that have taken American jobs, and ultimately build a wall to secure the southern border.

The third day, “Make America First Again,” the party focused on improving the nation with the goal of having America rise to the top among its competitors by renegotiating with countries, such as China and Russia.

On the fourth and final day, “Make America One Again,” Trump appealed to an array of people, such as POCs (people of color) and LGBT+, in order to unite the community and ultimately build a broader platform to represent the diversity of America.

Adapted from an 1861 speech by Abraham Lincoln, Tennessee Rep. Marsha Blackburn said, “If all do not join now to save the good old ship of the Union this voyage, nobody will have a chance to pilot her on another voyage.”  With this, Blackburn alluded to the fact that Trump is the only candidate worthy of steering that ship and tackling the many problems the nation is currently facing, such as racial violence and gender discrimination.

Despite his many supporters, some Republicans fear Trump may be incompetent in the role as president. Some party members refused to attend the convention. For example, “Sen. [Ben] Sasse [did not attend] the convention and [took] his kids to watch some dumpster fires across the state, all of which enjoy more popularity than the current front-runners,” a spokesman for the Nebraska Republican and frequent Trump critic told The Hill.

Ohio Gov. John Kasich, one of the former Republican candidates, has not endorsed Trump and also refused to attend the convention in his home state, though he planned on attending several state delegations and addressing the U.S. Hispanic Chamber of Commerce. Also, most notably, the previous Republican presidents, George H.W. and George Bush, refused to attend and endorse Trump as well.

Though Texas Sen. Ted Cruz, also one of the former Republican candidates, did cspeak at the convention, he originally indicated that he would not support the nominee.  In a turn of events, Cruz has changed his stance and endorsed Trump on Sep. 23.

Despite those wary of Trump’s candidacy, convention speakers did their best to bolster the nominee, hoping to prevent the party from splintering.

Many prominent Republicans showed their support for Trump, including former Republican presidential candidates, such as House Speaker Paul Ryan of Wisconsin, Dr. Ben Carson, and Newt Gingrich. Celebrities, such as Willie Robertson of “Duck Dynasty” and actress-businesswoman Kimberlin Brown, also attested to Trump’s ability to macro-manage.

Trump’s supporters focused on his business expertise as an indicator of his capability, suggesting that he is fully able to manage the country while maintaining strong ties to other nations.

Trump stated, “I have a different vision for our workers. It begins with a new, fair trade policy that protects our jobs and stands up to countries that cheat. It’s been a signature message of my campaign from day one, and it will be a signature feature of my presidency from the moment I take the oath of office. I have made billions of dollars in business making deals – now I’m going to make our country rich again. I am going to turn our bad trade agreements into great ones. America has lost nearly-one third of its manufacturing jobs since 1997, following the enactment of disastrous trade deals supported by Bill and Hillary Clinton.”

Under Trump’s “Law and Order,” reminiscent of Nixon’s own “Law and Order,” he plans to curb crime. He stated, “Decades of progress made in bringing down crime are now being reversed by this administration’s rollback of criminal enforcement. Homicides last year increased by 17% in America’s fifty largest cities. That’s the largest increase in 25 years. In our nation’s capital, killings have risen by 50 percent. They are up nearly 60% in nearby Baltimore… The number of police officers killed in the line of duty has risen by almost 50% compared to this point last year. Nearly 180,000 illegal immigrants with criminal records, ordered deported from our country, are tonight roaming free to threaten peaceful citizens.”

Through this, Trump portrays the violence that affects America and indicates that he will be able to reduce the crime rate, especially in cities, to an all-time low. Though the crime rate today is the lowest in 3 decades, he indicated that the crime rate has been rising in parts of the nation due to Obama’s failure to act on urban violence.

Trump vigorously stated that he will defend the Second Amendment under any circumstance while blockading illegals as well as possible terrorists from nations where terrorism has been shown on the rise in order to protect America from any possible foreign threat.

Trump also indicated that since President Obama took office, “…another 2 million Hispanics have joined the ranks of those in poverty… The number of Hispanic children living in poverty increased by 15 percent in that short period of time.”

He lays the blame on Obama and Clinton for their inaction on events that unfolded throughout the nation, which included the Benghazi incident as well as the email cover-ups. Because of their inaction, Trump points out that the consequences had played a huge part in inflaming terrorist organizations such as ISIS.

Trump vividly described the faults of his competitor, Clinton, by showcasing her numerous failures in areas for which she was responsible. Trump asserted, “In Libya, our consulate – the symbol of American prestige around the globe – was brought down in flames. America is far less safe – and the world is far less stable – than when Obama made the decision to put Hillary Clinton in charge of America’s foreign policy. I am certain it is a decision he truly regrets. Her bad instincts and her bad judgment – something pointed out by Bernie Sanders – are what caused the disasters unfolding today. Let’s review the record. In 2009, pre-Hillary, ISIS was not even on the map.”

With this, Trump points out that Clinton, an echo of Bill Clinton, has been agreed upon by the Republican Party as an incapable leader and predicts that another Clinton presidency will ruin the nation due to her failed policies.

At the end of the convention, the Republican Party reached out to the audience by empathizing with the people that their shared fears, anger, and voiceless cries that went unheard for eight years can be fixed with Trump as President. They again emphasized the consequences of an Obama presidency with Clinton as the ultimate perpetrator of the conflicts taking hold on the world and the nation.

Since the convention, both candidates are facing even more obstacles. In the days leading up to the election, Trump will attempt to solidify his platform by lessening his controversial statements and reaching out again to the working class and diverse communities.

He will continue to depict Clinton as a self-interested individual, especially in light of the email controversy. This election, regardless of the issues and events that have taken hold, will prove to be one of the greatest, if not the greatest, challenge America has to face.