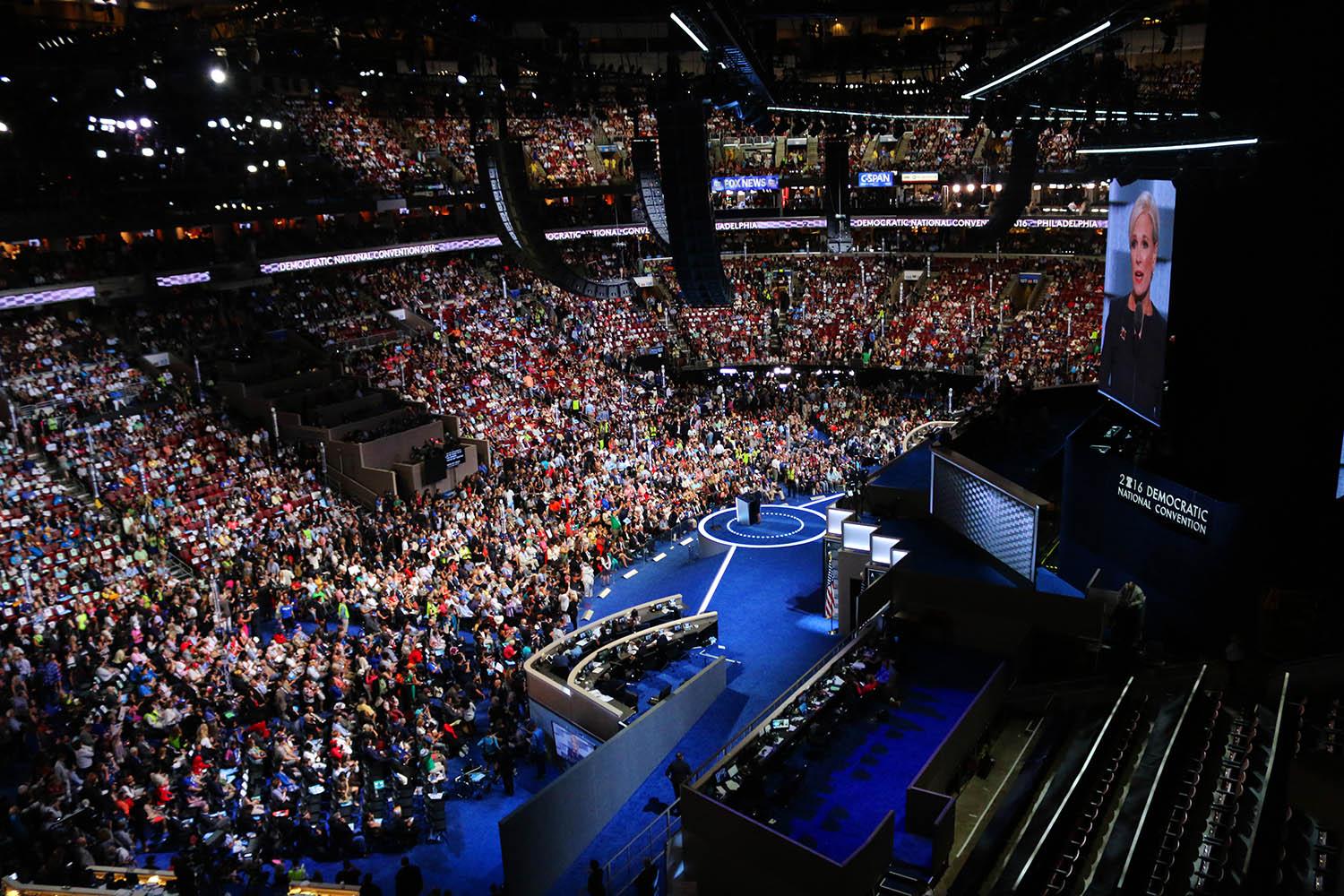 The Democratic Convention took place in Philadelphia in late July, bringing commerce into the city and headlines into news channels across the nation. (Grace Marion)

The Democratic Convention took place in Philadelphia in late July, bringing commerce into the city and headlines into news channels across the nation.

At the Democratic Convention this July, history was made when hundreds of the supporters and delegates of Senator Bernie Sanders staged a walkout in protest of the treatment of the Sanders campaign and its affiliates by the Democratic Party.

Despite the ongoing theme of party unionization, reports of the confiscation of signs that favored Sanders and his policies, such as abandonment of the Trans Pacific Partnership, surfaced throughout the convention in addition to those associated with the Sanders campaign, who were missing credentials, as well as accusations of the implementation of agitators posing as Sanders supporters on the convention floor.

“We’re still behind him because of the issues he was pushing forward, and I know he tried his best to make sure, even though he’s not the nominee, that his issues were being heard,” said Sanders delegate and Florida resident, Gillian Edwards Brown, in an interview with The Playwickian during the walkout that has now been coined on social media as “Demexit.”

Although approximately 90 percent of Sanders’ supporters will be voting for the Democratic nominee Hillary Clinton in November, according to several surveys by Pew throughout the year, many Sanders supporters plan to continue fighting for the change that his campaign promised to bring about.

“It’s our job to make sure that we don’t keep quiet, make sure that we push, and we make sure that his issues are not forgotten… That’s what the people want, that’s what we need, and we need to make sure that this is something that we hold them accountable for. His campaign was the spark that ignited an inferno that’s been brewing for a long time. He came out and he burst it wide open…but he was just the vessel, because the movement is beyond him now, it’s bigger than that. We have to give him homage for what he did, but eventually it’s our collective efforts that need to push it forward and keep to momentum going,” Brown continued.

Sanders’ supporters do not stand alone in their thirst for a continuance of the political revolution that he began. He and his staff launched a campaign entitled “Our Revolution” in late August issuing seven ballot initiatives and endorsing candidates across the country for positions for everything from senate to school board that mirror the ideals of the Sanders’ campaign.

Regardless of this ongoing political division within the masses of the Democratic Party, many of those who are branching off under Sanders still see Clinton as their knight in shining armor in comparison to the popular presidential alternative, Donald Trump.

“There is no starker contrast between two candidates that we’ve seen in our history so we as a people in this country are going to have to make a decision as to which direction we are going to go. And are we going to go the direction that Trump talks about that he’s going to take us or do we want to go the direction that Hillary Clinton wants to take us. It is not just metaphorically but literally a fork in the road that will take us to two totally different universes so that’s the decision we have to make. It’s not about how you feel about student loan debt or if you think we should support NATO or build a wall. It’s so much bigger than that. It’s what philosophical pathway are we going to go down as a nation,” said Hillary delegate and Oklahoma Senator Kay Floyd of District 46.

Clinton and Sanders fanatics alike have a myriad of fears regarding a Trump presidency: mass deportations, destruction of religious freedoms, pro-Russian biases, reduction of gun control, and arrests made on the grounds of reproductive decisions.

“It [the punishment of women who chose to undergo abortion] is the natural extension of the policy of abortion being wrong. When Trump said that women should go to jail for abortions, he was speaking of a logical, natural progression from if this shouldn’t happen and it does the people should be punished. So we need to just get it out of our heads that it’s anybody’s problem what the women and the man who is supporting her for whatever reason or—let’s just put it this way, when it’s as hard to get a gun and ammunition as it is to get an abortion, I will be happy,” said Indiana Sanders delegate Sue Spicer.

Trump’s campaign website promises a wall built on the United States’ southern border, paid for by Mexico; an extreme decrease in taxation and a simplification of tax code; healthcare reform in the form of the removal of the Affordable Care Act from American law; stronger trade ties with China; a reform of the medical system in place for veterans; and a staunch defense of second amendment rights. Trump’s speeches often reach far beyond these promises a few of which—reform of the medical care system for veterans, for example—most Democrats and moderates do not oppose.

Some Democrats are beginning to see the Trump campaign, or what the Republican nominee has tagged onto his campaign, as an effective tool in uniting the country politically, whether it is for or against him, in the long run.

“[Bernie supporters are] good Democrats and they know what this country has to offer and they reject the racism, the xenophobia, the narcissism, the sociopathology of Donald Trump, which is a good thing—and yes I do think that there is a not very public, but very significant number of conservatives and Republicans who are frightened to death by Donald Trump and rightfully so, and will vote for [Clinton] in November,” said Clinton delegate and minor Massachusetts politician, Andrea Cabral.

In addition to the policy-based contrast from the Republican nominee that Clinton offers, her supporters often point to her lengthy political resume to build her viability as a candidate.

“Hillary Clinton offers us experience, insight that really, as President Obama said, no presidential candidate has ever had before. And on issues such as student debt and access to college, the environment and climate change and immigration reform, we really need her presence there,” said Texas house member and Clinton superdelegate, Lloyd Doggett, in an interview with The Playwickian at the convention.

Clinton served as secretary of state under President Obama, U.S. Senator to New York, first lady of both the United States and Arkansas, a practicing lawyer, a law professor, and an activist, according to her campaign website. Born in 1947 into a Republican family, she attended Wellesley College after completing high school and then enrolled in Yale law school, where she met her husband and was one of only 27 women in her graduating class. Later, she served as a lawyer for the congressional committee which investigated President Nixon.

One delegate at the convention, Patricia Doss, defended the point that Clinton likely would’ve been in office already if she had gotten over her conservative past, and hadn’t run against Obama.

“I think that if she hadn’t run up against one of the greatest politicians, Barack Obama, who I supported 8 years ago, that she would’ve been president eight years ago. But Barack Obama is a phenom and she also had to get past her Iraq war vote. That’s why I didn’t vote for her eight years ago. She had to prove that she wouldn’t be sending our troops all over the Middle East, and she proved that as secretary of state,” said Doss, Clinton delegate of Missouri.

As nine out of 10 Sanders supporters have now pledged their November votes for Clinton, it’s no surprise that Clinton and Sanders lovers alike believe she will carry through with the policy adaptations she has brought over from the Sanders campaign.

“I am very confident that the soon to be president Clinton will adopt, maintain, and articulate as well as implement the various activities that we want to have happen for our country. I feel secure in that because now we have a motivated voting base where we’re going to get a full, active Senate, House of Representatives, a strong set of new judges. Our country is going to move in a democratic way and we’re going to be able to work across the aisle,” said Texas Sanders delegate Timothy Butts.

As the country inches closer to the election, both Clinton and Trump are facing harsher challenges than they did in their primary runs. The state of Clinton’s health has come into question by some members of the public, and her previous use of a private email server during her stay as Secretary of State under President Obama is also mentioned frequently by her opposition. Trump, on the other hand, has made what many are calling a turn from his previous policy positions—his tax plans are now more aimed at appealing to working class families, and under his newest campaign adviser he has avoided making as many controversial statements as he once had. 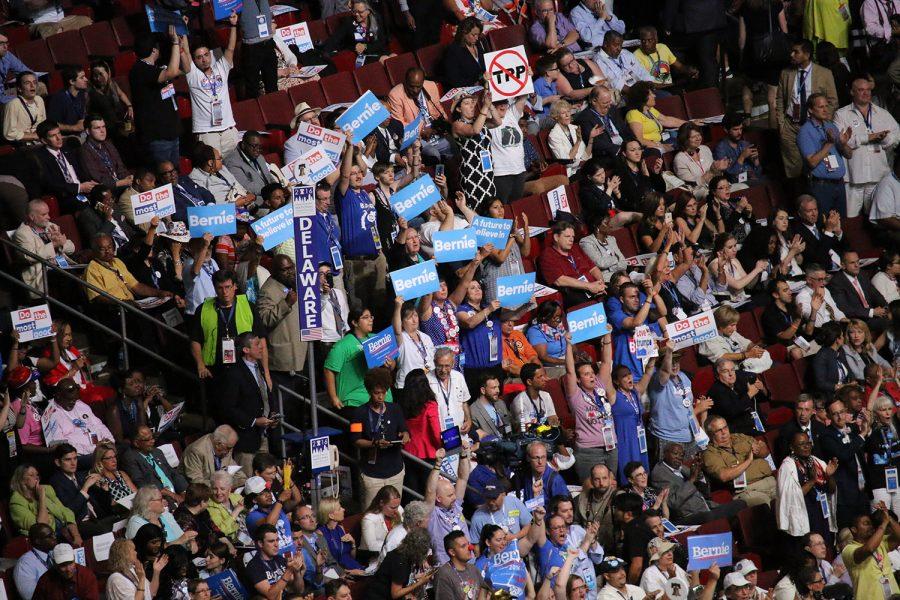