Bullied and not believed

Students worldwide have been dealing with the issue of bullying. 19% of students in high school have reported bullying according to stopbullying.gov- this statistic may be more honest and larger in number if students did not fear repercussions from reporting their bullying.

Kai Vendetti, a junior at Neshaminy High School, opened up about their experiences with bullying. They said that they were bullied in middle school because of appearance, what they said, and interests. It all became worse when they came out as bisexual.

“..and when I was finally out in high school as bi, people decided ‘Hey, let’s go after them for this.’ They’d come up to me and ask if I was into some chick or some dude, or like whatever. I sit there like, ‘You’re conventionally attractive, but not my type.’ and then they brought up some of my old middle school crushes- and that was not a fun time.” Vendetti explained.

Bullying can happen for many reasons; In Vendetti’s case, it was because of their looks, hobbies, what they said, and the fact that they are LGBTQ+. But in the case of Emily Alexander’s daughter, the bully had a bully of their own.

A recent case was brought to the attention of the school board during an emergency meeting on January 4, 2022 by Alexander on behalf of her daughter, a Hoover Elementary School student. At Hoover, a student continuously bullies her daughter daily on the bus. The most recent incident as of the meeting required the bus driver to pull over on

Lincoln Highway and physically pull the child off of her daughter. She filed a police report, which eventually, with the help of social media, got the student removed from her bus. Even after all of this, the bully left her with a severe concussion that removed her from all extracurriculars and school. Alexander accounts that the bully was being bullied as well due to his anger issues.

Christina Savage, a guidance counselor at Neshaminy High School, spoke about her experience with bullying from a staff perspective. When dealing with cases, the main priority is safety of the student and that they are comfortable in school.

“A lot of times students just don’t want to create problems or escalate it. Besides the viciousness of the situation, I think that a big part of it is that the student is comfortable,” Savage stated. “Our goal is that the student is safe, they aren’t put in that situation again, and that the appropriate consequences are issued. It’s kind of a tiered thing- addressing the behavior, but also making sure that the student feels safe.”

Bullying has serious consequences on the mind of its target. It can be anything from anger issues to problems dealing with emotions as a whole. Bullies oftentimes end up being bullied by someone else, similar to the case of Alexander. Some victims may go as far as considering or committing suicide. Vendetti opened up about how the bullying was severe to the point of them almost taking their own life.

“…and I’ve definitely made some attempts on my life because of it,” Vendetti explained. “But I always ended up backing out at the last second because I could never commit to it.”

Savage provided her input on how bullying affects students, saying that it will seem awful and make a student sad, but once they tell someone they will be at ease.

Situations like these need to be handled with care and patience for the victims but a responsible use of power to deal with the bully. One can not overstep someone’s boundaries when they are reporting an incident, but while also researching thoroughly to understand the whole situation. 7% of bullying incidents end with the victim attempting to commit suicide as stated by stopbullying.gov. As tragic as this is, it can be prevented.

If you notice your friend being bullied, say something. Protect those you love, before you lose them. Alexander ends with a call to action with a quote from her daughter- the answer she gave when asked, why did you stop talking about your bullying situation?

“Who cares about the bullying. It doesn’t even matter.” 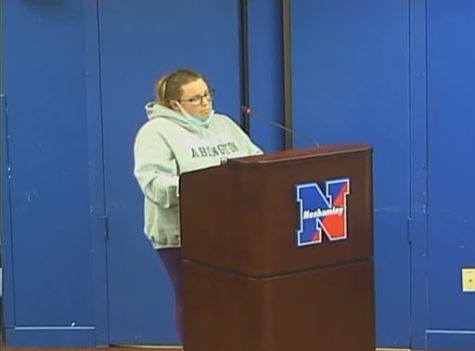 At The Playwickian we accept everyone regardless of race, sexuality, gender, background, religion, etc. So, please know that we want the best for our Neshaminy community. If you or a loved one has or had suicidal thoughts or committed self-harm, please reach out to your guidance counselor or one of the following hotlines: