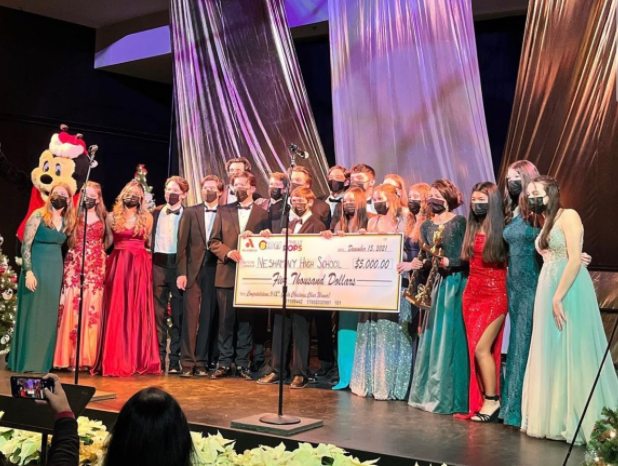 Cheers erupted around the school district on Friday, December 11, 2021, as it was announced on the radio that Neshaminy High Schools Select Choir won the Christmas choir competition on B.101.

Select Choir won with their rendition of “What Christmas Means To Me” originally performed by Stevie Wonder.

On the day of finals, those in the choir went around asking peers to vote for them and advertising on their social media. Teachers even offered bonus points in return for students voting.

There was nowhere you could go without seeing the voting campaign.

And rightfully, their hard work paid off as they won first place, $5,000, and a performance at the Kimmel Center.

As the choir continued to prepare, they were alerted that those who remained unvaccinated were unable to perform due to safety precautions, leaving many in confusion and simply at a loss.

Despite their depleted numbers, the choir continued up to the Kimmel Center unphased and with a plan.

There they met the B.101 radio hosts Kristen Lessard and Steven Kelly. They were then awarded their massive $5,000 check in front of the massive audience.

Neshaminy’s Select Choir gave a show-stopping performance that the students in the community and those in the audience will remember forever.