Was the trading of Carson Wentz a mistake? 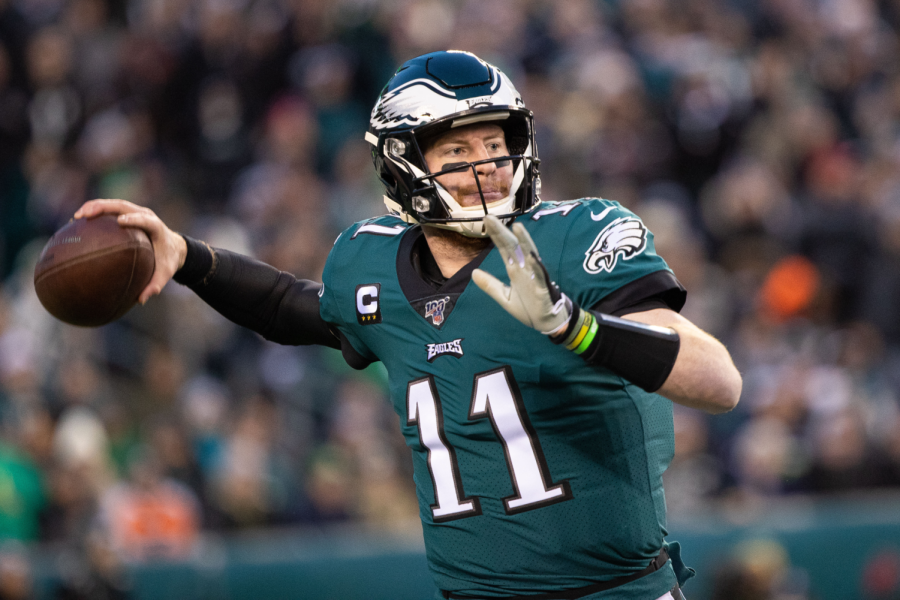 On March 17, 2021, the Philadelphia Eagles traded quarterback Carson Wentz to the Indianapolis Colts for a 2021 third-round draft pick. Though, once backup quarterback Jalen Hurts stepped up to the plate in 2021, it raised the questions of which quarterback performed better and did the Eagles make the right choice?

The trading of Carson Wentz was a major decision for the team as Wentz was the heart and soul of the team for the years he had been with them.

In the 2017-2018 season, he came alive, throwing for 3,297 yards and playing like he was going to take the Eagles to their first-ever Superbowl victory. Sadly, he was suddenly injured in a game later that year against the Los Angeles Rams, tearing his ACL and throwing him out for the rest of the season.

The Eagles went on to win the Superbowl, embracing Nick Foles as their new leader and leaving Wentz behind on the bench. After that day, Wentz was never the same and did not have the energy he once had during the 2017-2018 season. Once Wentz was in Indianapolis, the second-round pick in the 2020 NFL draft: Jalen Hurts had to step up.

Hurts attended Alabama State University from 2016-2018 and Oklahoma State University in 2019. He had to become the starting quarterback and leader for the Philadelphia Eagles. So far, he has led the Eagles to only three wins with a whopping five losses. The same is true for Carson Wentz this year for the Colts. Statistics show that this year, there are clear areas of gameplay where each quarterback dominates the other and others where that is just not the case.

As far as passing yards are concerned, the players are very close. Wentz threw for 1,926 yards while Hurts threw for 1,819 yards. This is very close and could even change if Hurts has one good game. The yards/attempt is identical, at 7.1 yards, showing that both quarterbacks can throw the ball well with quality precision. But it also shows that Wentz has 14 touchdowns this season while Hurts only threw for 10. So Wentz so far has played far better than Hurts as far as passes are involved.

But as far running yards are involved, there is a clear winner in this category. Jalen Hurts dominates Carson Wentz this season by a long shot. Hurts has run four times more than Wentz, running for 432 yards while Wentz only ran for 108. This is because Hurts has attempted to run without throwing or handing the football off 73 times compared to Wentz’s 25 times. This shows that Hurts has speed and is not afraid to show it. Hurts can take a broken play, scramble around, and turn that negative into a positive with his speed.

The other important asset in the NFL is experience. Carson Wentz is now in year five since getting drafted in 2016, while Hurts has only played eight games in his entire NFL career. Hurts has a lot more to learn about the sport. Wentz, on the other hand, has been in the league for a longer time and has had many more seasons to learn how the sport is played and is more comfortable and used to playing as a starting quarterback.

Overall, both quarterbacks have a lot of skill in some similar and some different areas of the game. Wentz has more experience and is more comfortable with his passing ability. Hurts is better at scrambling, avoiding getting tackled, and gaining yards on foot. These are both great advantages in the game of football, but the statistics show that Wentz should not have been traded. There is no great outcome that the Eagles gained by trading Wentz. If anything, they are a worse team because of this. 8 weeks into the season, it shows that Jalen Hurts has the opportunity to be a good leader and quarterback, but he just has not shown that yet and has not had the great year that Eagles fans hoped he would.