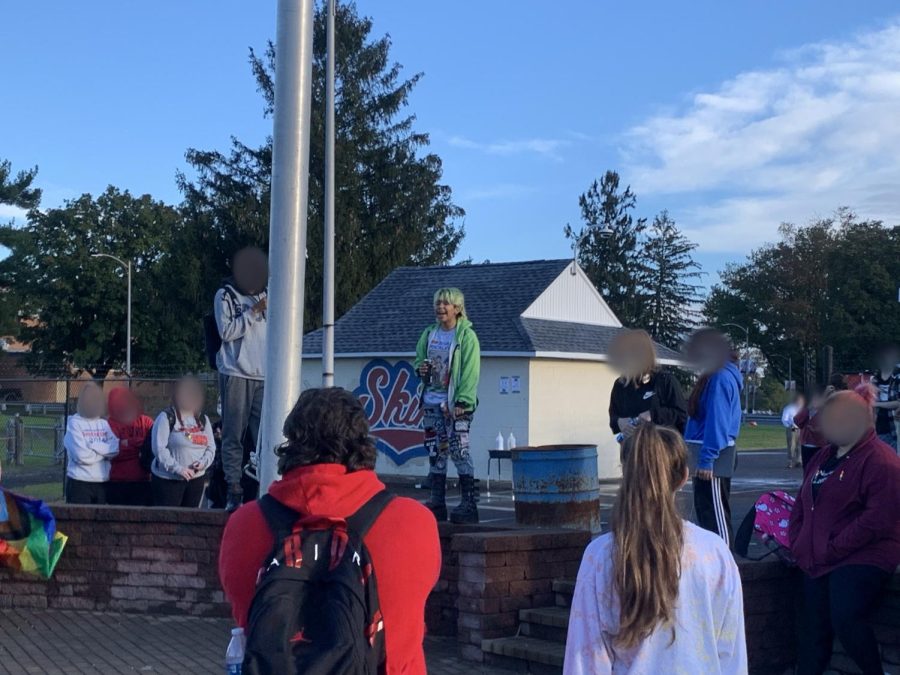 Image courtesy of Lyndsay Metts. Faces have been blurred for student privacy.

A peaceful protest against racism, homophobia, and other social issues was held at Neshaminy High School on October 27, 2021, second period. Earlier in the month, a small group of students decided to spread the word of a protest they wanted to put together after multiple students claimed they had experienced injustices inside and outside Neshaminy High School.

Students all over Neshaminy claim to be fed up and tired with the discrimination in the high school, and when it comes to combating racism and trying to make school a better environment for all different types of people, students feel that this issue is often only talked about without any resulting action.

Whether it be students using racial or homophobic slurs in the hallways, many students who led the protest stated that they feel unsafe and unsupported while at school. Neshaminy students claim to have often felt that their issues weren’t prioritized, which is what led to the need for a peaceful protest in the first place.

With speeches and emotional statements, the protest brought to light the many issues that marginalized students experience. Whether it was addressing sexism running through the school or the issues related to the school mascot, students delivered anecdotes and expressed their opinions on issues plaguing Neshaminy, leaving onlookers, including other Neshaminy students, with many mixed feelings.

One of the faculty members witnessing and watching over the protest was Principal Ryan Staub. He shook hands with one of the students who had made a speech speaking out against the marginalized environment brought by Neshaminy High School and its students. As a large number of students gathered in the art gallery, Staub suggested students move the gathering outside.

“You came here to walk out, then walk out,” Staub said when addressing the students.

When returning from their walkout, several students shouted things like “anarchy”, and

The next day, a second protest was announced, but this time, was seemingly used more as an excuse for some to cut class. In attempting to bring order to the unorganized gathering, Principal Staub recommended that students again take their protest outside.

“You have issues, and you want to walk. I’ve expressed to you that you can walk,” Staub said.

Following his statement, a student asked, “So what you’re saying is we can go all the way to the stadium?”

Staub affirmed this, and the walk quickly intensified as students headed towards the football stadium as administrators oversaw.

As a result, Neshaminy staff and students have taken a beneficial step of creating the club ‘Active Minds for Awareness and Change’ (AMAC). Run by Ms. Savage, the group meets on the first and third Monday of each month.

The club aims to provide a creative, supportive, and educational space with the goal of promoting a safe school community where all students feel included and protected. This is a great place to have your voice heard and advocate for those whose voices aren’t.

As concerns with racism and other social issues surfaced and plagued students’ minds, the protest was viewed as the first step to combat these issues. While many held mixed reactions to the outcomes of the protest, most agree that it was a necessary first step to enact future change. There is still more to be done and Neshaminy needs to remain partnered with students, faculty, and advisors to provide the most effective and safe work environment for students.