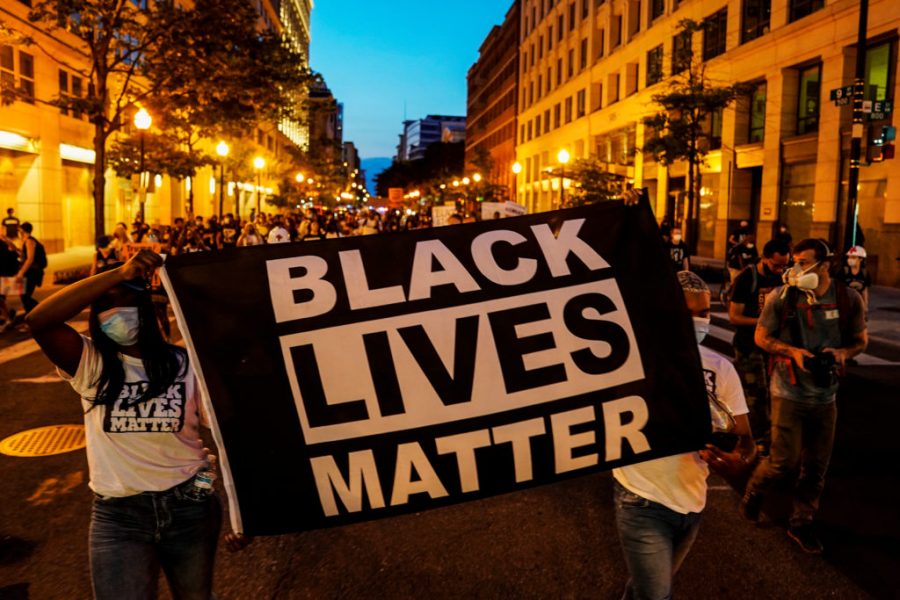 People hold up a Black Lives Matter banner as they march during a demonstration against racial inequality in the aftermath of the death in Minneapolis police custody of George Floyd, in Washington, U.S., June 14, 2020. REUTERS/Erin Scott

For many people getting pulled over at a routine traffic stop is annoying but it’s no big deal. But for people of color, it could mean life or death and for Daunte Wright, Rayshard Brooks, and countless others it was and ended up resulting in the latter. From a young age, children of color all over the country are taught to describe everything they are doing as they’re about to do it in the presence of a cop and are told to keep their hands in view at all times. But even with these precautions, countless minority families mourn the loss of their sons and daughters, brothers and sisters, moms, and dads.

After the Black Lives Matter movement gained massive media attention last summer and continues to rightfully rage on, many white people such as myself truly realized for the first time that the police system is blatantly racist. Since then 521 individuals (African American and Hispanic citizens) have been murdered by police. Many people defend the cops by saying, well they were running away from the police. Just because someone is running doesn’t mean they should be put to death. Cops aren’t supposed to kill guilty people either.

Many white people hold the idea that the majority of crimes committed in the US are by African Americans. When in fact most mass shooters that this country has seen have been white and they’ve been apprehended in handcuffs and gently taken off the premises to begin their booking process in jail. If it was a black man, he’d be dragged out of the building most likely already dead.

There are many problems throughout the system. proper training is one of them. To become a cop, it takes 13 to 19 weeks of training. To give you a comparison, it takes 4 to 5 years to get a cosmetology license. People who dye and cut hair get more intensive training than the people who are supposed to de-escalate situations and save lives. The effects of this timeline can be directly seen every day. You can see it in the way the cops handle people in mental health episodes or the way they handle people who are just blatantly scared. They use too much unnecessary force on people to the point where they kill them (George Floyd, Elijah McClain). Their training needs to be more intensive when it comes to proper methods of restraint and de-escalation tactics instead of pulling out a gun every time someone cries wolf.

These problems also stem from traffic stops, search warrants, and prior prejudices. People of color are murdered on the street for having various regular objects that are “mistaken for a gun”. People are killed for just being in their own house. Breonna Taylor was killed in her sleep after officers executed a search warrant. No threat was present. Botham Jean was killed for sitting in his house while eating ice cream after an off-duty officer shot him because she claimed she mistook the apartment for hers. Stephon Clark was murdered for standing in his grandmother’s backyard after officers mistook his cellphone for a gun.

The prejudices officers hold against people of color can easily be seen in the way they treat white offenders. Kyle Rittenhouse attended a BLM protest in Kenosha, Wisconsin. He went there with an AR-15 and the intent to kill. That’s exactly what he did. After he was attacked by other protesters who felt threatened by his firearms, Rittenhouse killed two people. He was not detained until much later and received millions of dollars in donations. He was even hailed a hero by police and white supremacists all over the country while his victims took the heat.

In Charleston, North Carolina, police took Dylann Roof, a mass shooter, and neo-nazi, to Burger King because he was hungry. Because he was hungry after he killed 9 people. People on the streets are teargassed and detained for simply protesting to gain basic human rights.

Recently the POC community celebrated a victory in their fight for justice. Derek Chauvin was convicted on April 20, 2021, for the murder of George Floyd. His sentencing date is a while out. However, he is one of the first officers who not only was charged with the unjust murder of a black man, he’s one of the first to be properly convicted as well. Though to white allies this is seen as a big step for racial equality, it’s nowhere near enough. There are thousands of others who never got justice and most likely will never get it. Not until we fight to change the justice and law enforcement systems.

As citizens, we have to educate ourselves and others and encourage law enforcement officers to speak out against their peers when they see injustice being committed. Donate, educate, and use your privilege for good if you’re white. Have those tough conversations with the people around you. Only then will we be able to take the necessary steps to end police brutality and the constant racial injustice we see in the media almost every day.