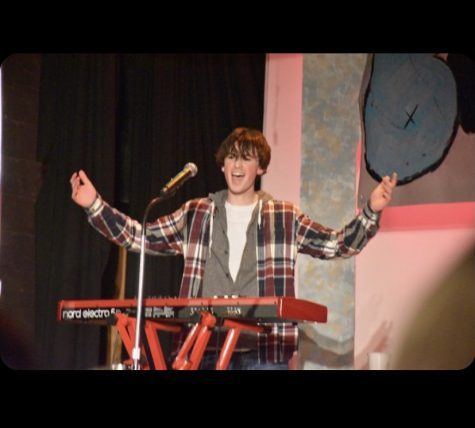 From music, to drama, to a band eagerly working on their next project, David Scott shares how his time at neshaminy has helped him learn and thrive.

First showing an interest in theater when he entered Neshaminy and performing in school musicals at his friend’s old catholic school, David has since moved on to pursuing his music career. In 2019, Neshaminy originated band Nothing but a Nightmare released their first album “Nostalgia” featuring Neshaminy alumni Eddie Tamanini and David on the guitar.

““Eddie is a great gig hound, he’s a really great salesman and a good friend to have” Scott says.

“I was a super big Beatles fan Sophmore year. Right now I’m really into pop punk. Pop Smoke and Machne Gun Kelly are some of my favorites now” David frequently can be seen in the music wing at school where he’s exploring and expanding his musical talents.

“Saxophone’s my main, guitar, piano, I play drums but not well”.

This multitude of musical experience doesn’t come from out of the blue. David’s family comes from a wide musical background with his father teaching music at Morrisville High School before switching over to history.

“I could talk about music history all day” David exclaims.

Recently, David has been experimenting with different song writing elements for NBAN’s upcoming project. He often writes in his free time and is extremely excited to share what he’s come up with. Even for musically inclined students like himself, David still struggles with writer’s block from time to time “I was in a slump where I was doing the best thing over again so now what I try to do is every night before I go to bed I’ll listen to mad for like an hour and I intake the melodies and implement that into what I’m working on, good artists borrow great artists steal”. David takes a lot of inspiration for his music from “the two Paul’s” Paul Simon and Paul McCartney in both his songwriting and guitar playing.

David’s music career is absolutely going to continue after his time at Neshaminy. He’s recently received a scholarship from University of The Arts in Philadelphia but is debating between going there and West Chester University and of course you can still catch him jamming with Nothing But A Nightmare, their next project currently in the works.