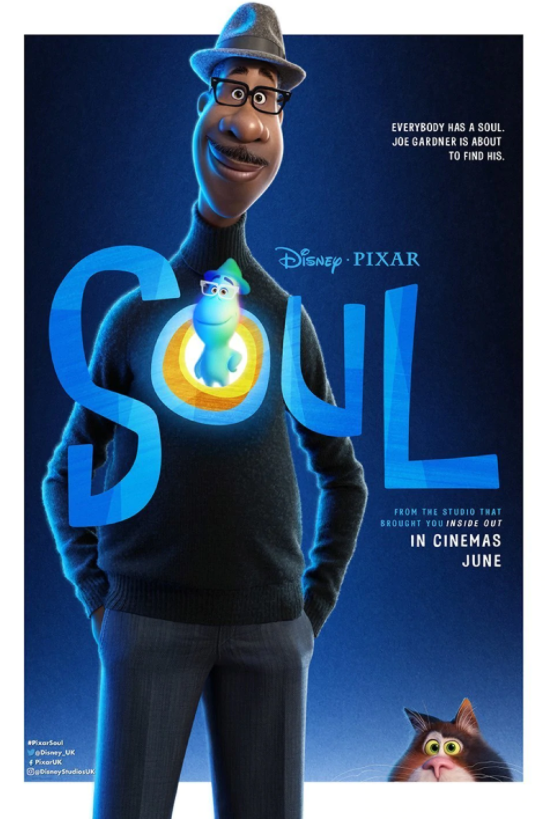 2020 showed us adversity as we’d never faced before. By December, the world was craving something, anything that would bring any type of positivity or hope for an uncertain future. It’s very rare that a movie comes around and touches so many people and speaks volumes on a topic we’re all too familiar with, without even mentioning it in full. Pixar’s “Soul” does a beautiful job of reminding us of the importance of life and living, treasuring our most simple moments.

Announced in 2019 with a teaser trailer. Many audiences speculated that “Soul” was to be the next “Ratatouille”, Pixar’s 2007 film that is thought to be it’s most artistic and inspiring. At least this was the mindset until the second half of the teaser played. After seeing our main character Joe Gardener, an African American aspiring jazz musician go through the autumn-colored streets of New York City, we see him plummet into a manhole and wake up as a little blue “soul” blob.

He then interacts with 22, Tina Fey’s character who seems to serve as the comedic relief. Audiences were quick to point out that this seemed to be another case of “black characters aren’t allowed to be black” meaning an animated movie will introduce a black protagonist only to have them be reduced to something that doesn’t showcase their color.

Think of “The Princess and The Frog” or “Spies in Disguise”. Other fans were worried that the implementation of these “soul blobs” would make the movie more kid-friendly and help the studio steer away from tackling dark messages. But that could not be farther from the truth.

I never lost hope with this movie. It genuinely looked like something that would be thought-provoking, especially when the follow-up trailer was released and Tina Fey’s “comic relief soul blob” character asked, “Is all this living really worth dying for”? That was all I needed to know, this one was going to be a tear-jerker which is something Pixar has mastered. And with director Pete Doctor who’s made other notable films such as “Up” and “Inside Out”, I knew I was in for an emotional rollercoaster

It was also announced on October 8, 2020, that the film would premiere on Disney+ on Christmas Day. With the closing of many theaters due to Covid-19, many movies optimized streaming services. However, many fans were worried that “Soul” would be milked for all it was worth after Disney required additional payment for the unsuccessful “Mulan” remake.

Luckily, Disney fell victim to the holiday spirit and gifted us “Soul” to enjoy with our families on what was most definitely an unusual Christmas. After a day of presents, zooming with family, and feasting on a 25-pound turkey that was supposed to be for Thanksgiving but didn’t thaw in time, my family and I sat around the couch and headed straight to Disney+ to see what Pixar had in store for us.

“Soul” did not disappoint. Compared to its predecessor “Onward”, aside from the animation style, you feel like you’re watching a different studio film. Pete Doctor and Kemp Powers delivered a spectacular take on the meaning of life without pulling any punches. My mom was actually surprised at the direct references to death and other bits of imagery that she feared would be “too frightening for kids”.

For older fans of Pixar such as myself, this film was a fantasy come to life. Fans who had criticized the trailer quickly learned that this film did not fall into similar tropes and had its own take on topics that had been explored time and time again. Jamie Foxx’s upbeat and lively voice brought Joe Gardener so much life while Tina Fey served as a perfect counterpart with her witty sarcastic remarks, a perfect dichotomy with Joe’s overall positivity.

With its atmosphere of a modern-day New York City along with authentic characters of all different backgrounds and outlooks on life, “Soul” proved to be one of Pixar’s most heartfelt films and in the times we’re living in, a glimmer of hope is more than necessary to remind our nation to never as Joe would put it, “miss out on the joys of life”.