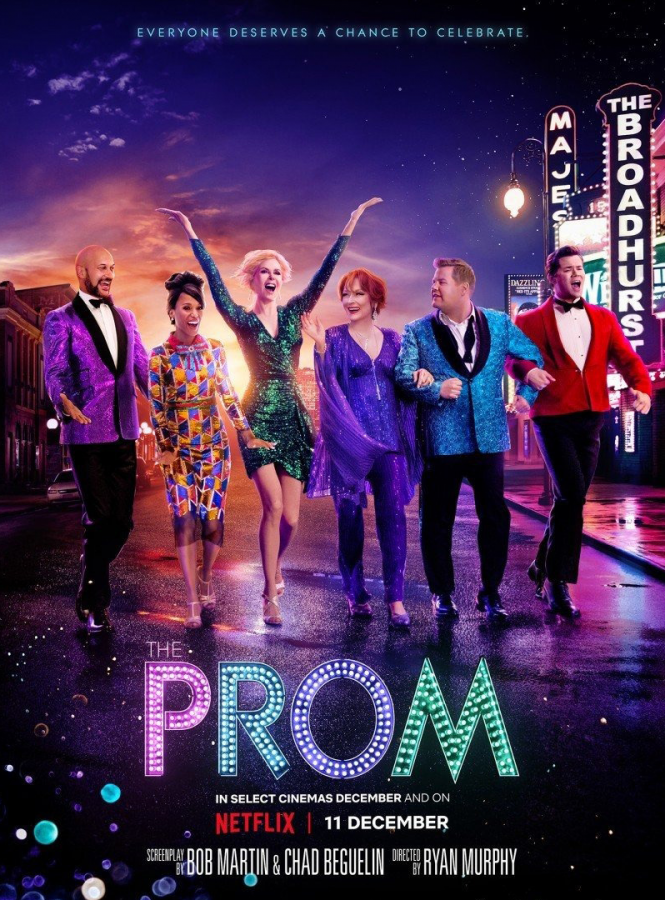 Broadway has been home to groundbreaking shows for years, from Les Miserables to Phantom of The Opera. These productions have immersed their audience in tales of love that have broken boundaries. But by 2018, new boundaries needed to be broken. With the legalization of gay marriage across the nation in June of 2015, more representation broke out, spanning from TV shows to movies, and of course, broadway musicals.

2018’s “The Prom” features one of these necessary boundary-breaking stories that follows a teen girl Emma as she dreams of taking her girlfriend Alyssa to her prom in Indiana. Unfortunately, the school’s policy against same-sex coupling catches the attention of four Broadway stars, who then travel to Indiana to teach the school about love and acceptance.

The musical premiered in Atlanta in 2016 but quickly gained traction and eventually made its way to Broadway in 2018. Critics were intrigued and amazed at the story’s core message, Variety calling it, “What Broadway heart is all about”.

The musical provided a new refreshing take on the classic high school love story and soon shattered even more glass ceilings with the performance of “Time To Dance” at the 2018 Macy’s Thanksgiving Day parade which featured the two main female actors sharing a kiss, the first lesbian kiss to ever be shown live at the parade after going on for almost a century.

After making its way into the hearts of critics and LGBTQ+ members alike, “The Prom” soon caught the attention of Netflix and other Hollywood stars such as Nicole Kidman, Andrew Rannells, and James Corden who appeared in the movie which premiered on Netflix on December 11, 2020.

The movie received mixed reviews due to some misguided satire and pacing issues, but as a lover of Broadway and movies alike, I can safely say that this is a movie we all need right now. Amidst all the chaos and division of today’s world, a story like this is sure to fill people with joy, from the upbeat optimist to the skeptical cynic.

The movie’s cast of familiar and talented faces brings the comfort of home while introducing new faces such as Jo Ellen Pellman and Ariana Debose, who starred in Hamilton and is set to play Anita in the upcoming remake of West Side Story.

The flow of the scenes can be a bit choppy at times, but emotional moments are the center focus and will surely bring topic-sensitive viewers to tears. Some notable performances include Academy Award winner Meryl Streep as Deedee Allen, a narcissistic Broadway actress learning the true meaning of selflessness, all the while giving stunning vocals and well-choreographed performances.

James Corden was also a stand-out but is receiving backlash for playing a gay character while he himself is a straight man. However, depth was not taken away from his character and his tear-jerking scenes were strong, almost bringing me to tears many times. The flashy numbers did not distract from the overall heartwarming message of this essential story. The amount of emotion and heart put into this project is clearly conveyed and is the movie’s strongest attribute.

No amount of backlash or criticism can take away from this story’s warm and radiant, wholesome feeling. This movie needs to be put in front of cynical minds in efforts to open them up and bring the world a little closer together during this difficult time.