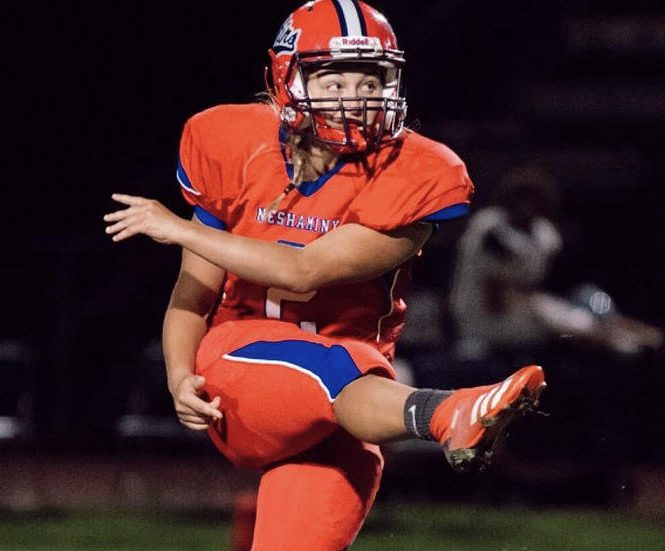 Women today are proving time and time again that they can do things just as well as men. In the sports world, it is no different. Women are making appearances in football, making waves throughout the country as there is now a girl kicker in the Southeastern Conference (SEC) in college football. Women around the country are breaking the narrative that they can’t compete on the professional field.

Today, girls are becoming more interested in playing sports like football, but are finding it difficult to find support from family, friends, and coaches to muster the courage to play football. It may be perceived that girls are “too small”, they are “too weak”, or that they just lack the talent.

Nina Mason, a senior at Neshaminy High School (NHS), didn’t let those narratives stop her. Even though her main sport is rugby, she wanted to break a barrier that was long thought to be unbreakable and played punter on the NHS football team. The punting phenom mentioned that her main motivation was to prove her friend wrong for doubting her abilities.

“Honestly, I was talking to my friend last year who was on the football team, and he said I couldn’t do it because girls wouldn’t be able to handle it, so that’s when I decided I was going to be a punter just to prove him wrong,” Mason said.

Nina also had a plethora of support. When she started playing football she always had someone in her corner cheering her on. Whether that be teammates, coaches, or family members.

“I had a lot of support from the team, coaches, and my family, who were the ones that pushed me to play this year.”

She went on to be a starter for the season, proving to her friend that she could in fact handle it.

However, something that’s often overlooked is the amount of work she put in to prepare to make the team. She was on a mission to prove that she deserved to be there; to prove that she wasn’t going to be just a benchwarmer. She wanted to be a part of the team and not just a girl. She aimed to outwork some of the guys who were on the team.

“I think I deserved it just because I spent a lot of time before practice and during preseason practicing punting, and I wanted to prove to everyone that I wasn’t just going to be a girl on the team but someone who could actually play,” Mason said. “I made sure I was doing all of the same workouts as the guys and being as much a part of the team as everyone else.”

Initially, upon making the team, there were a lot of things scampering through her mind. The thought of fear was the biggest thing for her to overcome. She was scared about what people would think of her playing football.

“I was terrified at first, just because I was scared of what other people would think and how the guys would like a girl on the team, but I felt very included the entire season and loved it,” Mason said.

In sports, players often find it difficult to find the right people to stand in their corner. Nina gave a quick message to those players who go through this.

“I would tell them that anything is possible if you just put the work in,” Mason said. “And if someone says you can’t do something, do everything you can to prove them wrong because you don’t know the opportunities you might miss.”