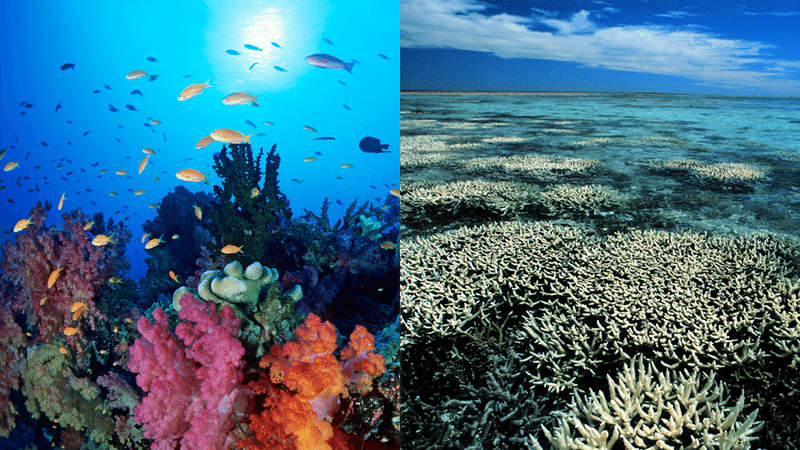 “Underwater rainforests”, as scientists refer to what we know as the coral reefs, will soon be a thing of the past. As years go on, coral reefs, including the Kingman Reef in Hawaii, Southeast Asian Coral Reefs, and the most famous of them all, The Great Barrier Reef in Australia, have been damaged to an irreversible extent.

A threat to not only our world, but also to the coral reefs, is climate change. As the Earth’s atmosphere warms, the oceans warm. This causes the coral to bleach and infectious disease outbreaks to rise. The ocean absorbs carbon dioxide from the atmosphere, starting a process called ocean acidification.

The process reduces calcification rates through decreases in pH in reef-building and reef-associated species. The increase in sea level, changes in frequency, extreme tropical storms, and altered circulation patterns in the oceans are several other negative climatic changes that have added to the loss of coral reefs.

Other than global warming, mankind itself is another threat to the coral reefs. Humanity has poisoned water, overfished, and gathered coral for aquariums over the years.

Pollution that involves sediments, insecticides, pesticides, oils, debris, and worst of all, nutrients, is part of the main concern. In fast-growing algae and other species, these nutrients flow into the waters and eventually cover the coral reefs.

For those who haven’t seen any coral reefs, scientists suggest venturing to one soon, for the reefs could disappear completely.

According to a report made by the National Oceanic and Atmospheric Administration (NOAA), which follows on from an earlier study on the health of the world’s coral reefs, “more than 90 percent of reefs will be threatened by 2030 and nearly all reefs will be at risk by 2050 unless action is taken now to reduce the threats.”

If all coral reefs disappear, it would lead some species to go entirely without food. For example, the parrotfish spends its whole day chewing coral and hanging around them. Along with thousands of other species, the parrotfish will have to change its diet and habitat completely. On the other hand, seahorses and other species threatened by carnivores are slowly losing places to hide from predators.

Neshaminy junior, Olivia Beideman, shares how she has incorporated saving coral reefs into her life by donating to foundations that rebuild the reefs as well as talking to others about this particular topic.