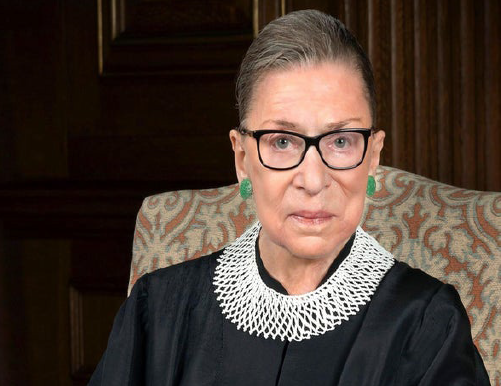 In 1993, former president Bill Clinton named only the second female justice to the United States Supreme Court. A woman of little stature but fierce intelligence; a woman remembered for paving the way for women’s rights and financial equality throughout the nation. That woman was Ruth Bader Ginsburg, or as her supporters called her “The Notorious RBG.”

Ginsburg was born in Brooklyn, New York, in 1933, just 13 years after women were granted the right to vote. Coming from a less fortunate family, Ginsburg quickly learned the importance of hard work and deeply valued prosperity. She graduated top of her class from Cornell University and, shortly after, journeyed to study at Harvard while her husband was in the military and her first child was just a newborn. She astounded her professors with her abilities and surpassed her male peers.

In 1959, she graduated from Columbia Law School but, despite her outstanding achievements and studying at three prestigious universities, Ginsburg still found herself the victim of sexism. However, she never let this discrimination halt her ambition. In 1980, she was appointed by former president Jimmy Carter to the United States Court of Appeals, where she worked for 13 years until she was appointed to the Supreme Court in 1993. Not only was Ginsburg the second woman, but she was also the first Jewish woman ever to be appointed.

Ginsburg has been deemed an icon for women’s rights, but she was a fierce advocate for all Americans and focused on cases of all types of discrimination, especially involving gender and financial equity. Her more prominent cases included shifting focus to women in the workplace and how sexist environments affect them (Ledbetter v. Goodyear Tire & Rubber Co.). She also helped ensure that widowers were entitled to equal benefits as windows (Weinberger v. Wiesenfeld), which wasn’t previously the case. Ginsburg took a liberal stance on most issues but worked cooperatively with conservative judges and was often admired for her tenacity.

Ginsburg shared a close friendship with fellow justice, Antonin Scalia, and their friendship proved that civility between opposing parties can and did exist.

“What’s not to like?,” Scalia asked, referring to Ginsburg, “except her views on the law.”

With so much discontent and hostility between republicans and democrats today, their friendship offers a look into what people can accomplish when they separate personality from party and put their differences aside for the common gain of the American people.
This idea is cited in Ginsburg’s final wishes to let the next president, be it, Trump or Biden, to replace her position in the supreme court. The Senate has moved forward with appointing federal judge Amy Coney Barrett to replace Ginsburg.

Barrett has paid homage to the late Ginsburg, saying, “I’ve been nominated to fill Justice Ginsburg’s seat, but no one will ever take her place.”

Democrats and Republicans have been divisive during this challenging time without remembering and perpetuating RBG’s legacy that she so proudly upheld. Promoting equality, civility, and justice throughout America with pride and dignity is something the American public can learn from her and practice every day.
In this unprecedented challenge, common ground must be established. Learning from each other and rebuilding our communities has been proven to be most effective in the face of adversity, and this is something RBG recognized and fulfilled.

“To make life a little better for people less fortunate than you, that’s what I think a meaningful life is,” stated Ginsburg. “One lives not just for oneself but for one’s community.”