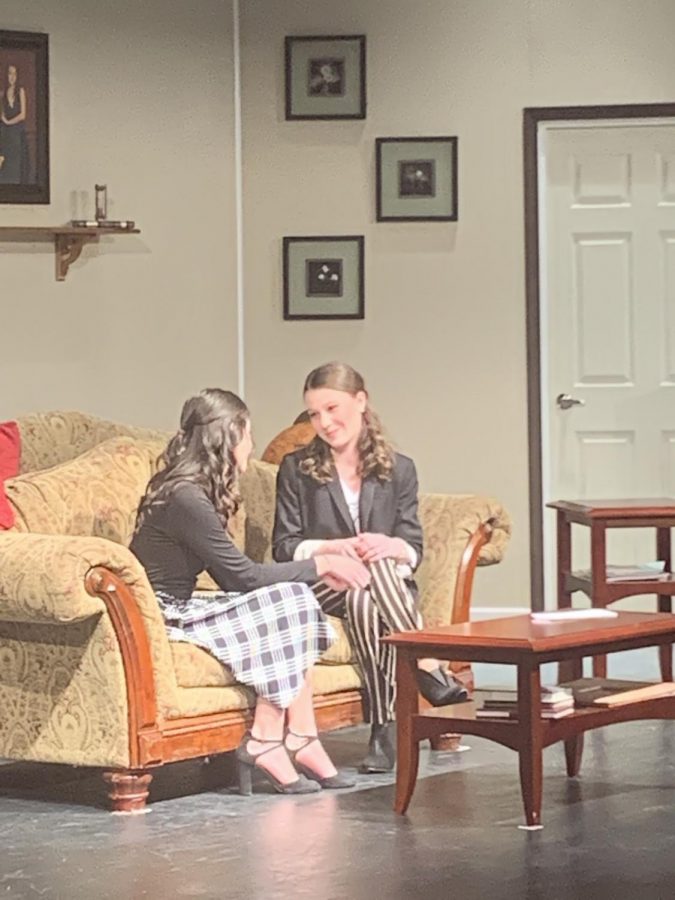 “Deadly Nightcap” The latest Black Box production sold out Friday Nov.  22 and Saturday Nov. 23 and kept audiences biting their nails till the very last line. The play follows Jack and Sarah Radford, two British upper-class citizens that share ownership of an estate business that is rumored to have engaged in shady dealings. Many twists and turns ensue and audiences are left to speculate who the culprit could be in this classic whodunnit play. By intermission, audiences were enthralled in the suspense and gasping at one of many plot twists throughout the show. This show captured a lot of attention with massive sales, some people attending multiple nights to see both casts. This was the first black box production to feature two casts, and most likely won’t be the last due to the success in tickets sales. Shannon Mohan, a Neshaminy junior who played the role of Kate Warren, said “Right from the start I was engaged.The auditions were structured really well because we performed our scenes in pairs and it really relieved the nerves. hen the cast list went up I was so excited.”Shannon explained that she really enjoyed the tone of the show. A lot of productions have graced the small but powerful stage of the black box. Other shows in the past have seen huge success with audiences such as the  classic “James and The Giant Peach” in 2018 and “Mirrors” in early 2019. “Deadly Nightcap” was a dark and sophisticated tone shift from past shows, and really allowed both cast members and audiences to be swept up in an eerie atmosphere. Despite the unsettling tone, Shannon explained that there was never a dull moment in rehearsal, “Even though it’s a serious show we found time to hang out and joke around which was fun. I loved rehearsal because we all got to see the scenes take shape. When dress rehearsal came around and we saw the other cast do a full run through it all became so real and more exciting”. On the introduction to double-casting in the black box theater, Shannon said,“It was really nice to be able to work with someone. I liked seeing how everyone took their character in a different direction. With such a difficult show I’m very proud with how it all turned out. Everyone worked so hard and so well with each other.” The shows challenges only added strength to the actors’ performances. People’s reactions heightened as the show went on. Chills ran down audience member’s spines as creepy transition music was played after every loaded scene all leading to a climax that kept everyone guessing until the final lights went up. Both new and old faces starred in “Deadly Nightcap” and has definitely paved the way for more and more talented aspiring students to come forward.   “I’ve learned so much from this show,” Shannon says. “I didn’t really think I could play a role like this, but this opportunity really showed me what I could do. I loved not only getting into my character but developing friendship between the characters. This show was so interesting and I can’t wait for what comes next.”And what comes next for Shannon and the Neshaminy drama program is exciting indeed. You can see Shannon and some of the other show-stopping stars of “Deadly Nightcap” in “Matilda” premiering later this winter.