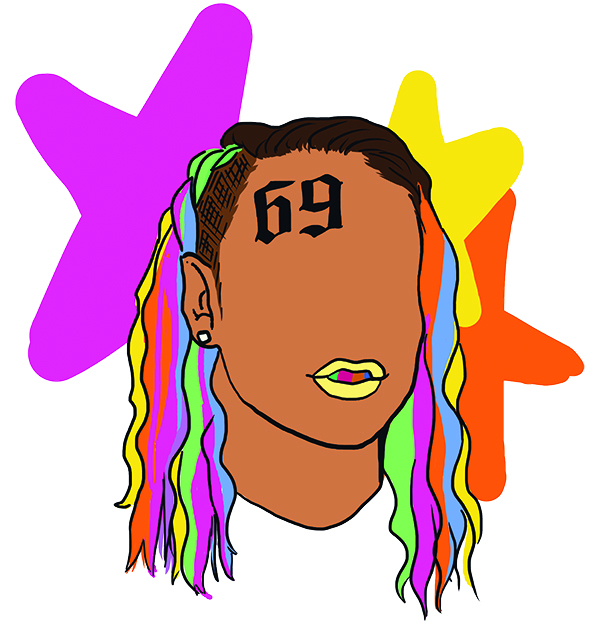 Rapper Tekashi 6ix9ine, also known as Daniel Hernandez, was arrested on Nov. 18 for his involvement with a New York gang on multiple charges, including gun charges and racketeering. If found guilty, Hernandez could be facing life in prison.
Hernandez has been linked to a gang called the Nine Trey Gangsters. They are known to have been involved in extortion, prostitution, narcotics distribution, and robberies, according to federal records.
Since Hernandez’s initial arrest, he has been re-sentenced on his charges of “Use of a Child in a Sexual Performance”. Back in 2015, Hernandez was sentenced to 1000 hours of community service while on probation, but because of his most recent law issues, the judge closed the case and gave him credit for all of the probation and community service time he was sentenced to.
The Nine Trey Gangsters, also known as TreyWay, are based out of New York, but they are just one sect of a much bigger group called United Blood Nation, who are most active on the east coast.
The United Blood Nation formed in 1993 in a Rikers Island Prison complex in New York by two gangs known as D.C. Blacks and Sex Money Murda. The Godfather of the UBN, Omari Rosero, was originally a Nine Trey Gangster, and devoted his entire life to the gang, going from “Scrap to become a 5-Star General.”
The rules of the UBN, known as “The 31”, were written by the founders of the UBN. All activities of the members of the UBN must be within the regulations of The 31, such as respecting the higher-ups of the gang, never giving the codes to outsiders, and the 31st day of every month must be spent “chillin.”
Since 1993, the UBN has been linked to several cases, some of which include murder, aggravated assault, narcotics distribution, wire fraud, and Hobbs Act Robbery. The gang has had the attention of many law enforcement agencies, including the FBI, for some time now.
In March of 2018, Rosero and several other bosses of the UBN were arrested for similar charges in Charlotte, North Carolina, and have been in prison since they plead guilty. To many it may seem like no surprise that Hernandez was arrested now, given this background.
Despite the piling evidence against him, Hernandez’s lawyer has vowed that they will not be accepting a plea deal. “A plea deal is simply off the table, even if the feds offer one,” Lance Lazzaro, Hernandez’s Defense Attorney, tells TMZ. Though there are photos and videos of him at the scene of several crimes, not a single one pictures Hernandez doing so much as holding a weapon. Lazzaro announced that they will be going to trial to prove his innocence.